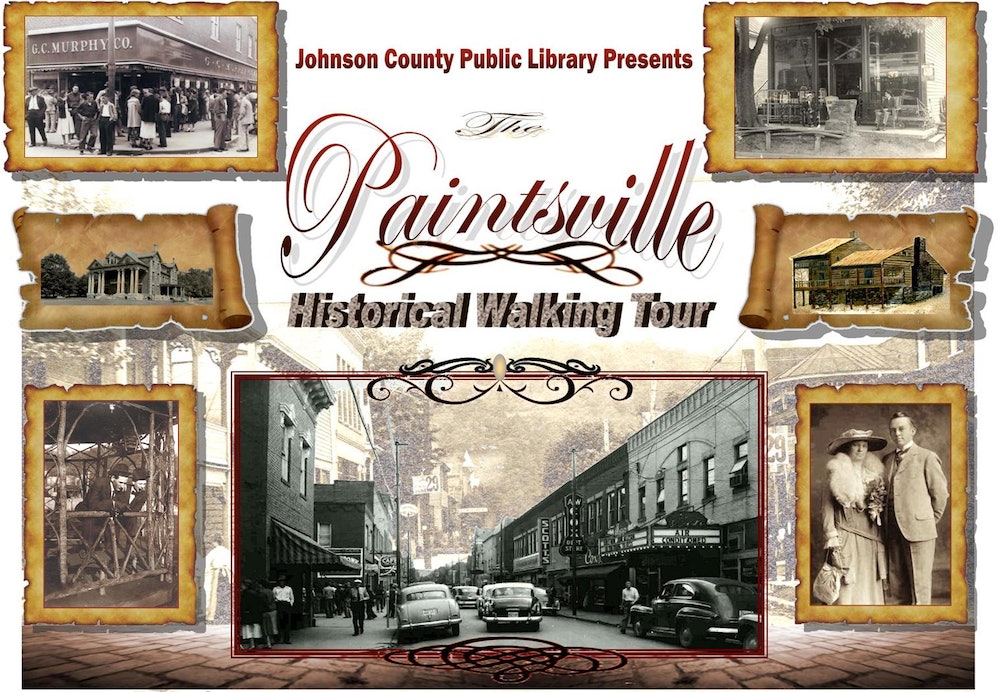 Welcome to The Paintsville Historic Walking Tour presented by the Johnson County Public Library. The library recognized the wealth of knowledge, photography and unique history surrounding Paintsville and decided to create this tour. The tour is a way to highlight local historians, preserve history and renew interest in the town for visitors and residents alike. There is a wonderful collection in the Patricia Patton Kentucky Room at the Johnson County Public Library, 444 Main Street, in Paintsville, Kentucky, where anyone can look further into any of the topics covered during the tour.

The tour has been led by volunteer and library staff docents since September 2010. These include Christie Cook, Dirk Cook, Jonathan Hall, Christy Terry, and Libby Auxier. A pictorial booklet was created for exclusive use by the tour. The booklet is entitled "Johnson County Public Library presents The Paintsville Historical Walking Tour" and features cover art by David Howell. The dedications page grants special recognition to Christie Cook, for her leadership and perserverance, "which helped keep our focus," and thanks to the staff of the Johnson County Public Library circa September 2010: Geraldine Adams, Tonia Bartley, Teresa Caudill, Patty McKenzie, Patrick Ross, Amanda Salyer and Ryan Skaggs. Director Karen S. Daniel concludes the dedication with the following: "This pictorial booklet has been created by those who have freely given of their pictures, so that we might share and show the importance of Paintsville from its beginning to present. We hope that this project will propel others to go out into the rest of Paintsville and Johnson County, and document the accolades our forefathers deserve."

Others were inspired to preserve the tour digitally and make it more widely accessible. In 2018, KVEC-sponsored Appalachian Innovation Coordinators from both the Paintsville Independent School District and the Johnson County School District, Bryan Auxier (PISD and also a JCPL Board of Trustees Member) and Jeff Cochran (JCSD), along with their student senators, approached JCPL about partnership in a project to digitize this tour using funds granted by Kentucky Valley Education Cooperative (KVEC). Director Karen Daniel, Program Director Christy Terry, and Educational Liaison Libby Auxier entered into this partnership with KVEC and work began during the 2018-2019 school year, continuing into the 2019-2020 school year, when production was all but halted due to COVID-19 pandemic shut-downs. Despite the shut-downs, during these two years, much progress was made toward the digitization of the tour. KVEC videographers filmed footage of many tour sites and recorded narration, Jackson Latta narrated the entire tour from the WSIP/WKLW studios and students from Jason Kinner's (PHS) and Todd Conley's (JCHS) media classes edited audio and video, as did Libby Auxier. Benches labeled "Paintsville/Johnson Co. Historic Walking Tour" were placed at various locations on the tour's route. Student senators from both schools shared about the project during the 2019 SOAR Summit.

Director Christy Terry and staff of the Johnson County Public Library, circa 2022, have each contributed to this QStory mobile app iteration of the tour. These staff are: Geraldine Adams, Ryan Skaggs, Shannon Reinthaler, Jessica Gibson, Brittany Pruitt, Krista Tackett, Cindy Standifer, Patty Reeves, Madison Carpenter and MacKenzie Ryan. The tour continues to be edited and added to and will, inevitably, change with time just as Paintsville and Johnson County have. We hope this self-guided tour will allow you to take your time and appreciate all the contributions that have been made toward our community and all the work that has gone into preserving this history. Enjoy!